Menu
BACK TO SEARCH
inShare44

January 24, 2020 – When lawmakers return to the state capitol on Feb. 3, they will consider House Bill 2791, the Child Passenger Safety Act. Championed by AAA Oklahoma and some 35 other healthcare, law enforcement and child advocacy groups from across the state, it seeks to protect children 8 – 17 years old with seat belts in the back seats of passenger vehicles. Licensed farm vehicles would be exempted from the proposed statute change. AAA Oklahoma and others supporting Rep. Ross Ford and Sen. Darrell Weaver’s bill to change the law are urging voters to contact their legislators using background on the issue and contact information for lawmakers at OKSeatbelts.org. 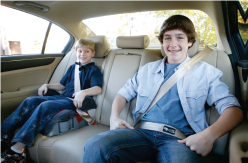 It’s a law that most Oklahomans already thought existed, according to Leslie Gamble, AAA Oklahoma spokesperson. “Sixty-eight percent of those surveyed in a AAA-sanctioned poll said they were unaware that Oklahoma is the only state that doesn’t require children in this age group to wear seat belts in the back seat,” she said.

In 2015, as legislators voted to adopt best safety practices for infant car seat and booster seat use for children 7 and under, language in the statute that addressed protection for older minors 8 – 17 year old was inadvertently struck.

When AAA Oklahoma and organizations like Safe Kids Oklahoma and the Oklahoma Safety Council learned of the error, they began efforts to reinstate the protection for older children into state law. “After all,” Gamble said, “older minors are more likely to be in vehicles with young drivers and with those other than their parents who may not uphold best safety practices.”

But, efforts since 2016 have been stalled by legislators who have contended that voters in their districts see this as an infringement by government. AAA’s poll contradicts this, showing 81% of those surveyed support this legislation.

“Those who say they already buckle up their children and don’t see this law as necessary won’t be affected,” Gamble said. “It won’t impact you if you are already taking correct precautions. But for the 16 kids in this age group who died without seat belts on in the back seats of vehicles and another 67 who were seriously injured in 2017 alone, we need this law. It will prevent future deaths and take Oklahoma off the list of 10 worst states for child passenger safety.”

“It’s surprising that we don’t already have a law to make sure all children are buckled up,” said Gamble. “But perhaps more surprising is how reluctant those who represent us have been to quickly rectify this gap. We can’t take their votes for granted. This is a 100% grassroots effort.”

Who's in the Driver's Seat? The Transformation of Transportation

On Tuesday, October 17, 2017, AAA and TEDx Wilmington held the first TEDx Salon dedicated to ideas worth spreading in transportation.

View a slideshow from the event

This TEDx WilmingtonSalon was organized in partnership with AAA

Keeping Member's interests at the forefront

Find the lowest gas price in your area

Tools, tips and other resources